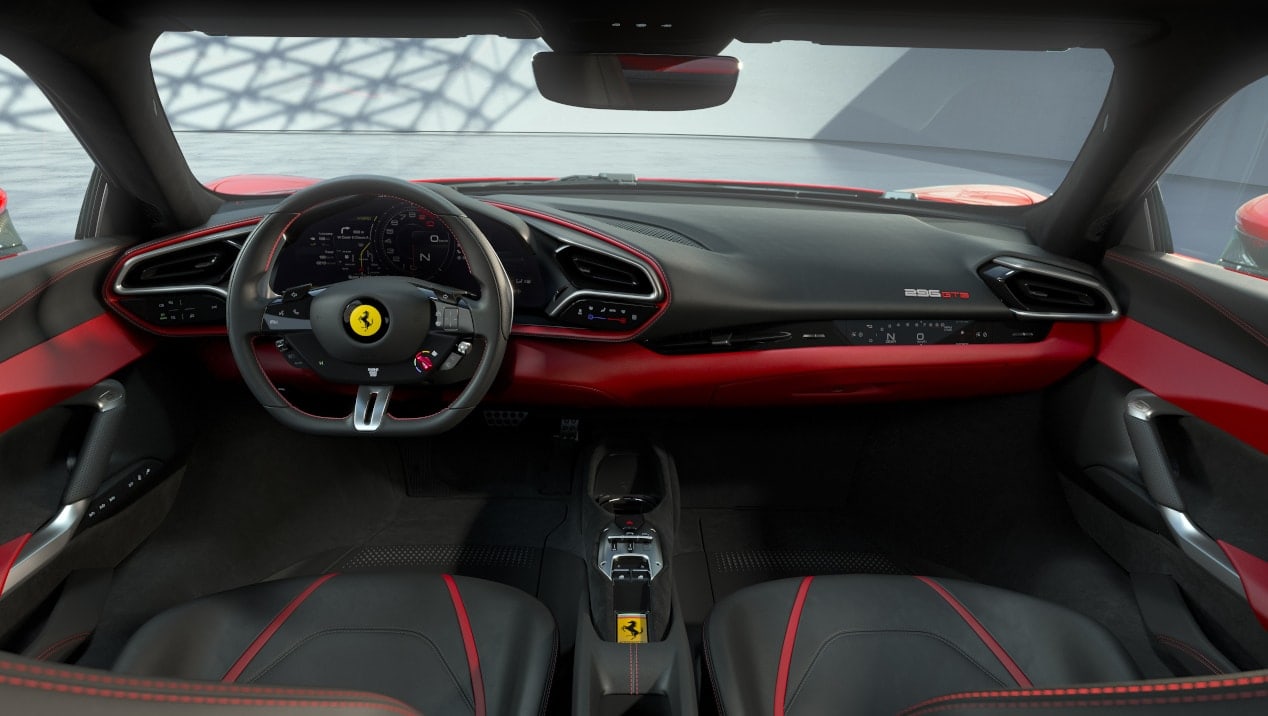 296 GTB: NEWEST THOROUGHBRED FROM FERRARI GETS A TURBOCHARGED V6

You might associate Ferrari with sonorous V8 and V12 engines that sing like Pavarotti but the Italian car-maker did have a fling with the V6 engine too. The first Ferrari V6 goes back to 1957 with the 1500 cc Dino 156 F2 single-seater.

Related: With the 2021 Roma, Ferrari heads back to its roots

Then later it produced the revered and immensely desirable Dino sports car. It did not have Ferrari branding and was named after Enzo Ferraris son but its svelte proportions along with the V6 engine gave the Dino a unique driving experience which cemented its place as one of Ferrari’s greats.

It was Ferrari’s idea for an entry level sports car. Years later in 2021, the clock is wound back with the new 296 GTB. It debuts a V6 engine and is the first prancing horse to do so. Indeed a revolutionary new model from a company whose cars cling onto emotional attributes based on its earlier cars.

However the 296 GTB should not come as a surprise since emissions and a rampant strive towards electrification has made life difficult for V8 or V12 engined cars. That said Ferrari will continue to make V8 and V12 engined models but as a statement the 296 GTB is a bold one. It takes on the McLaren Artura while it will sit alongside the V8 Tributo supercar in the Ferrari line-up.

The number 296 borrows from the total displacement of the engine and the number of cylinders while the GTB stands for (Gran Turismo Berlinetta). While it may sound blasphemous, the 296 GTB is actually a plug-in hybrid with an all electric 25km range. Hence you can cruise around silently amongst the Tesla’s in slow city traffic with utter nonchalance.

The V6 power train needs to be discussed since it is the first turbocharged V6 engine fitted to a Ferrari. A total output of 819bhp means this Ferrari will outpace its hyper car predecessors while putting it at the top of the rear-wheel-drive sports car segment. Getting such a high power output from an engine with such few cylinders is nothing short of engineering witchcraft while a lot of the technology is borrowed from the SF90 Stradale.

While power is one thing, the aural pleasure of a Ferrari should not be discounted and here the Italian sports car giant is claiming that the engine sounds like a “piccolo V12” (little V12). It combines the turbocharged noise along with high-pitch tenor associated with a V12. The gearbox is the all new 8-speed DCT seen on other new Ferraris like the SF90, Roma and Portofino M.

Styling wise it is a triumph of sorts with Ferrari taking inspiration from the past but firmly looking into the future as well. The 296 GTB has short overhangs and a pure sports car shape with a compact body. It is where art meets aerodynamics. The car takes inspiration from the 60’s Ferraris with the simple yet gorgeous lines.

You can see the sculpted body, the flying buttress theme at the rear, the transparent engine cover, the uniform but large air intakes and more. Even the headlights take their inspiration from the “teardrop-shaped” headlights of the past. On the 296 GTB, this styling theme is presented through two “faired-in teardrops” which are set into the front of the car like jewels.

The interior though takes a dip into the future with the all digital interface which made its debut in the SF90 Stradale. There are screens everywhere while the architecture is very sports car like. There is a standard passenger-side display too. You even get a HUD (Head Up Display). Ferrari traditionalists will take solace with the fact that there is a modern day interpretation of the classic metal gated gear shift while there is leather of course.

Expect to pay upwards of $300,000 for one while a hardcore version would be even more expensive along with having various performance/weight saving measures. The 296 GTB signals that Ferrari is making great cars one after another while also expanding its repertoire.